Uncomfortably claustrophobic to a level that touches unbearable and riddled with heartbreaking moments. Buried is an unprecedented achievement shot in its entirety at a single location with only one actor present throughout. However, don’t let Buried’s lack of visual diversity fool you. Despite being confined to a significantly small area and resting its success on the shoulders of a single man. Buried evokes an unlimited amount of responsive emotions and will mentally, as well as physically break you down. Do not take Buried lightly. It sticks inside your head and will leave you wandering around in disarray for days. Directed by visionary Rodrigo Cortes and starring Ryan Reynolds, literally the one and only. Watching Buried, it’s as if every passing moment is another shovelful of dirt piled onto your chest.

Paul Conroy (Reynolds) is an American truck driver working in Iraq in the year 2006. When Paul wakes, he is severely disoriented and struggling to breathe. Slowly realizing that he trapped inside a wooden case, buried alive, Paul begins to panic. Using his lighter, Paul looks around the box and comes to the realization there isn’t enough air for him to live long. Looking around, Paul finds a cell phone that allows him to contact the outside world. Paul soon realizes that the cellphone is placed there so his captors can contact him. After his assailants inform him of the situation and the ransom, Paul must rely on his intelligence and quick thinking to find a way out.

A film that leaves a bad taste in your mouth doesn’t come around too often. In my existence, I’ve only had three films have this affect on me, Martyrs, Eden Lake, and Buried. To make sure no one misinterprets “bad taste.” In no way am I concluding that it is a derogatory term. I am simply saying that when these specific films ended, I felt distraught, upset, and enraged. Which are terrific emotions to experience, especially when it’s a film provoking them.

The effectiveness of Buried solely rests on the distance Ryan Reynolds performance will take it. It would be easy to crumble under the immense pressure of bearing a picture solo. As a film needs to transmit a significant amount of dazzling sights and diverse emotions and being the only means of conveyance is certainly a challenge. Yet, Reynolds handles this chance with gentle anguish and relishes this distinct opportunity to demonstrate his talent and the vastness of his acting abilities. From the moment Reynolds is six feet deep, his transformation begins. Not only does he manage to successfully convince his family, friends, and possible rescuers of his calmness and safety. Reynolds does a remarkable job making the audience believe that he will ultimately make it out alive. 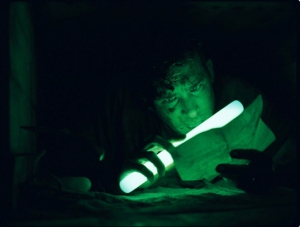 The only thing as equally impressive as Reynolds performance is director Rodrigo Cortes and writer Chris Sparling’s ability to create an emotional, thought-provoking drama from the inside of a box. Firstly, hats off to Sparling for creating such a unique, original script seemingly out of nothing. Being trapped underground in what is slowly becoming your coffin is no laughing matter. However, even this would be boring to watch for an hour and a half straight. But combining this with a set of other elements like fear, love, tension, worry, and a series of others makes for a riveting experience. Of course all this would be useless without someone who can capture these facets with creative direction, and that’s exactly what Cortes does. Having to film trapped inside four walls would usually prove to be the downfall of many directors. For Cortes, who takes a tight grip on the situation fearlessly, this restriction is only motivating and helps him reach new heights.

Even though at various moments in its runtime it feels as if you’re inhaling dirt. Buried is a consuming thriller with the heart to match.