An unflinching look into a faltering marriage as it evolved from a chance encounter. Blue Valentine doesn’t shy away from the tribulations and although at times it may be difficult to watch, there is no arguing with the authenticity on display here. Featuring a pair of unprecedented performances of unbearable depth and astounding accuracy from its two leads. Blue Valentine is a veritable gaze into the consequences of young love and other uncontrollable emotions. Directed and written by breakthrough visionary Derek Cianfrance. This uncompromising, atypical fairytale is both heartbreaking and enlightening. Blue Valentine is as potent and persuasive as they come and should be viewed with caution. Consider your current emotional state, Blue Valentine should not be taken lightly or inconsiderately trifled with. 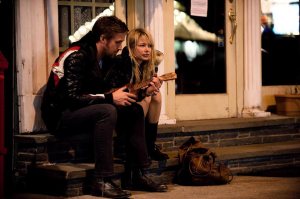 Dean (Gosling) is a high school dropout currently working for a New York City moving company. Cindy (Williams) is a pre-med student living at home with her parents and grandmother. Upon meeting by change, both fall in love with one another immediately. Cindy soon discovers she is pregnant and there is a distinct possibility it is from a previously relationship. Regardless, Cindy and Dean rush into marriage. Fast forwarding roughly five years, we now see the evolution of their relationship, their struggles, and the growth of their daughter. Dean currently works as a painter while Cindy is a nurse. As their lives continue to progress, the more they distance from one another and begin to crumble under their youthful, reckless decisions.

Despite a staggering amount of sadness and sacrifice. At times, Blue Valentine is equally as pleasant and rewarding. Trying not to weigh the viewer down with a significant amount of melancholy that is relentlessly constant, as well as boasting a pair of portrayals that are strong enough to bring its viewers to tears. Blue Valentine never loses direction and always keeps its heart beating for all the right reasons. While most films would falter under the restriction of having only two characters carry the story throughout, Blue Valentine always keeps its content fresh and progressive. Cianfrance provides a grounded, realistic entry into a genre that seems to continuously, albeit unsuccessfully shoot for sky and easily lose sight of what really matters, thankfully Blue Valentine is not the norm.

Cianfrance’s direction is near impossible to critique. When you’re able to snag a harrowing tale of utter sadness and regret, let alone a few moments through a lens, you’ve hit your stride. Cianfrance pulls double duty in Blue Valentine as he also scribes the screenplay. The main reason why Blue Valentine succeeds is its faultless attention to detail. This is directly related to Cianfrance’s outstanding script and heart-bursting direction. 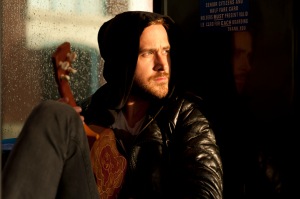 However powerful and poignant Cianfrance’s script and direction may be, Blue Valentine would be lost without its two leads. Starring Ryan Gosling and Michelle Williams as inwardly star-crossed lovers on the verge of catastrophe, Blue Valentine makes the most of its stars remarkable chemistry. Not only undergoing significant changes to their personalities and characteristics. Gosling and Williams outward appearances are shifted to accommodate their roles exhausting demands. While it may not always be pretty to look at. Gosling and Williams construct a formidable, more importantly believable relationship that isn’t your typical “happily ever after.” Gosling beautiful acts the growing frustration in reaction to Williams indifference of their relationship. In summary, It is exceedingly difficult to review their performances separate from one another because they are so connected.

Never hiding the foundations weaknesses and cracks or the fading sparks. Blue Valentine is a realistic romance that will render your insides torn and eyes far from dry.