For those who can stomach its bleak content for a brisk two hours. Snowtown is an emotionally rewarding thriller that challenges its viewers both mentally and physically. Make no mistake, Snowtown should be viewed with the utmost caution and preparation. It is a bold story based on actual events and proves to be a challenging ordeal for any viewer, horror enthusiast or not. Finding it extremely difficult to stick it out till the end, Snowtown is ripe with scenes that are excessively churning to watch. Consider it an achievement if you can watch it in its entirety without looking away once. Without a doubt one of the most arduous films to digest. Snowtown requires a strenuous effort, discipline, and diligence to get through. Surprisingly rooted by brilliant direction and haunting performances from its entire cast. Snowtown is equally as remarkable as it is disturbing.

In poor Salisbury North, a suburb of Adelaide, Jamie (Pittaway) lives with his mother and brothers, one of whom is Troy who sexual abuses Jamie. One afternoon, Jamie’s mother’s boyfriend takes indecent photographs of the brothers. When the police are informed, they are slow to intervene. Jamie’s mother is then contacted by a man who introduces her to John (Henshall). John despises pedophiles and homosexuals and harasses the photographer until he is forced to leave. John assumes Jamie’s father figure role and Jamie is drawn in by John’s violent and radical thinking. As John continues to brainwash the neighbourhood and Jamie, what follows is a series of extremely violent and unspeakable acts.

Perhaps the most brilliant facet of Snowtown is its ability to part ways with gore, for the most part anyway, and still leave your skin crawling and eyes cringed. By and large, if I remember correctly, I count one, maybe two murders actually occur on screen…needless to say, for a film about serial murderers, Snowtown is subtle filmmaking at its finest. While it is extremely difficult to understand or give reason to any psychopathic tendency, Snowtown is a good place to start concluding. Focusing more on the why than the how, director Justin Kurzel gives us unmatched insight into the minds that strike fear into humanity. Luring the viewer in with charismatic and hypnotic leads. Kurzel’s Snowtown proposes an unsettling contrast that compromises the viewers morals and loyalty.

Unlike most films that are difficult to watch, Snowtown has earned merit and has social-political value. I believe this is in direct correlation with Kurzel’s direction. It is truly phenomenal to witness Kurzel’s direction in Snowtown. It is completely honest, instinctive, and paced with inevitably violence. Kurzel uses the outstanding beauty of Australia for the backdrop to a helplessly ugly, and polarizing topic. If you can’t handle the vicious content, at least turn back to the screen to gaze at Kurzel’s masterful work behind the camera. 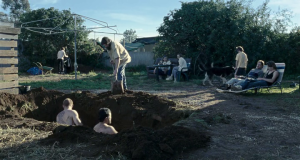 Supposedly picking up various locals to act alongside Daniel Henshall, Kurzel takes homegrown to a new level with Snowtown. Besides Henshall, the only other lead is Lucas Pittaway. Don’t think for a second that this ensembles lack of experience will undoubtedly result in poor, uninspired performances, actually, it’s quite the contrary. Each supporting role is invested and acted infallibly, truly believable. Yet, predictably, it’s the two leads who soak up all the limelight. Henshall and Pittaway have undeniable chemistry that they use decidedly to full advantage. Even though what they are set to accomplish together is unspeakably brutal, gutless, and purely evil. Their portrayals are stunningly accurate, heartbreaking, and mind boggling. The only aspect of the casts performances that rival those of Henshall and Pittaway’s is the hopeless, reluctant acceptance of their victims. 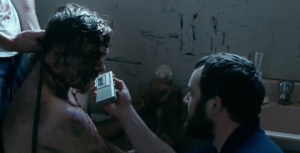 If you can stomach it, Snowtown is a rewarding experience that is sure to knock you off your feet.