An homage to the period-flicks of old. Takashi Miike’s “13 Assassins” is an epic addition into the samurai canon and sets a dizzying new height on the measuring stick. Unrestrained, impassioned, and utterly violent. “13 Assassins” is sure to quench the viewers appetite no matter how bloodthirsty. Revamping and reviving what was a faltering and fading sub-genre. Miike puts his modern twist on, while never forgetting, the immortal rules and makes “13 Assassins” an instant classic. Spending just as much time training and characterizing his samurais before sending them off on a path soon to be littered with severed heads and clever tactics. Takashi Miike once again proves why he is such a revealed filmmaker and adds another notch to his already legendary cult-status. “13 Assassins” is so relentlessly entertaining that you’ll never want it to end. 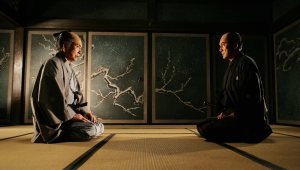 In the 18040’s, samurai power in Japan is coming to a close. Lord Naritsugu (Inagaki), younger brother of the current Shogun, kills and rapes at will. When a senior government official realizes that these heinous crimes are taking place and will continue to grow in severity when the Lord ascends to a higher position of political power, he hires a battle-hardened samurai named Shinzaemon (Yakusho) to secretly assassinate Lord Naritsugu. After gathering together his assassins, Shinzaemon and crew set out to ambush the Lord and his subjects. Upon being attacked by a weak force payed off by Hanbei (Ichimura), a loyal subject and protector of Lord Naritsugu, the 13 assassins must prepare for a battle that could mean their demise.

There’s something not seen by the human eye, seemingly invisible, but has an impact so immense, its undeniable, like dark matter…and it changes the ordinary into the extraordinary. Takashi Miike’s “13 Assassins” has this irrefutable quality in spades. We can argue that it’s the performances, Miike’s unparalleled ingenuity, or the story itself till we explode. Now, there is no question that all of these characteristics are bursting from “13 Assassins.” Nonetheless, this thing, is not a physical trait, it’s an aura, something infused that causes “13 Assassins” to transcend the screen and become priceless, timeless, a universally acknowledged masterpiece. Whatever it is, whether it’s some kind of magic, sorcery, or sheer dumb luck. “13 Assassins” will never be topped. I’m not insane, some films have this trait and it is a hallowed, humbling experience.

Miike’s “13Assassins” is a poetic showcase of his dynamic lyricism and unrelenting savagery. The efficiency and smoothness in the way “13 Assassins” pace proceeds is unrivalled. Miike takes his time, building up the sadistic, unsympathetic evil brick by brick while simultaneously constructing an unstoppable, immovable force for good in his unforgiving samurais. His monstrous, larger-than-life filmmaking style pays huge dividends throughout “13 Assassins,” especially during the seemingly never-ending final battle sequence that is breathtaking and heart-racing. His ability to capture the slightest detail with the utmost importance while remaining true to the large-scale “13 Assassins” is based upon garners endless kudos. It is exceedingly difficult to find fault in Miike’s form or genius, which in my opinion, has never been better.

You’d think that because there are thirteen characters playing relatively similar roles, in addition to a ruthless villain, his protector, and a massive army. It would prove senseless to try and keep track of each individual. Even if you wanted to, the task would appear confusing and daunting to say the least. However, in actuality, it is the exact opposite. The cast Miike and company have chosen add a distinguishable face and personality to each samurai and soldier. Miike simply laid out the characteristics for each of the thirteen and let the charisma and talent of the actors take control. Regardless, albeit sadly, of how impressive and unique each performance is, there are only three leads to speak of: Koji Yakusho, Goro Inagaki, and Masachika Ichimura. I’m not downplaying the supporting cast, they are equally as impressive, just in a more limited sense.

Goro Inagaki successfully tackles the challenging endeavour of creating a villain who surpasses all calamity, maliciousness, and wickedness, to become an antagonist who is truly repulsive, infuriating, and inhumane. Essentially, an adversary without morals, heart, or emotion. Someone who’d one would never want to come across. Koji Yakusho has the privilege of being at the centre of “13 Assassins” and doesn’t waste the opportunity. Carrying the weight of his samurais, Yakusho shows no signs of discomfort. Exuding the steady-hand, persistence, and leadership needed to accomplish even the most revolting of chores. As for Masachika Ichimura’s character, he is rather hard to categorize. Although he is a ruthless killer, there is no denying that he is torn between loyalty and what is right, and Ichimura illuminates this struggle perfectly.

Part ways with the annoyance of reading subtitles, if you have a problem with it, set priorities. After you’ve finished watching “13 Assassins,” you’re just going to want to watch it again anyway. So anything you may have missed visually when you were reading the extreme and emotionally diverse dialogue will be easily picked up the second time you watch it, or the third, or the fourth, etc…get it? Takashi Miike’s “13 Assassins” is that rare picture who’s merit will never diminish, no matter how many times you view it. For a genre with numerous masterpieces such as “Seven Samurai” and “Yojimbo,” it would appear nearly impossible to add another. If anything, Miike’s entry tops all other pieces in the canon, which should speak volumes to the effectiveness and entertaining value of “13 Assassins.” 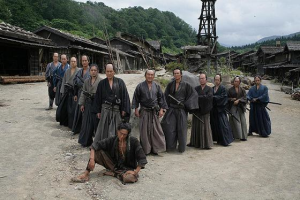