I don’t normally watch short films unless they’re referred to me or nominated in that specific category at the Oscars…and even then it’s just to stay calibrated with the goings on in the film industry. It’s not that I find them to be a lesser form of filmmaking or anything like that, far from it. Simply put, they don’t interest me or catch my attention is what I guess I’m trying to say. Off the top of my head I couldn’t name you more than a handful of vignettes, let alone those that I rather enjoyed, and to be honest a lot of those that I do recall are made by Pixar. On the other hand, I do like to dip into the occasional anthology, but I don’t think they’re considered the same thing. I can’t grasp the concept of them. I feel it’s too much like jumping into a story at the climax. To their credit though, as the evolution of the short continues to progress, they tend to contain more and more effort into establishing a thorough, relative perspective. I don’t know, am I missing something? Please comment below with your thoughts and some references if you’ve got. Now, enough of my blabbering, onto the review.

Not to be brash, but the only reason I watched “Little Favour” was for the same reason I think anyone will, Benedict Cumberbatch. Everything that man touches, I must witness. I’ve been an obsessor of his for a good long while now, as I’m sure many of you will attest to. And as I do with anything I post containing Cumberbatch, I implore you to watch his earlier work, specifically “Stuart: A Life Backwards” and “Hawking,” but I digress. “Little Favour” directed by Patrick Viktor Monroe, begins with Wallace (Cumberbatch), a war veteran dealing with PTSD attending a meeting with an old friend, James (Colin Salmon), whom Wallace owes a great deal of debt .Upon agreeing to babysit James’ little girl as a little favour, Wallace returns home with his new found responsibility and is viciously attacked and subjected to questioning by a group of thugs searching for James.

The premise really is quite something, extremely intriguing. Nevertheless, I found it too short to absorb fully, I just couldn’t get into it like I would have preferred to. To its credit though, for its length, “Little Favour” did manage to grab me significantly, more than any previous short film anyway. Now, I don’t know if I’ve been spoiled by such rich, powerful performances recently, but I couldn’t help but want more from the ensemble. Or it could be that alongside Cumberbatch, it’s simply impossible to measure up. Salmon really is terrific, the shining star apart from Benedict himself. Other than that however, the performances left a lot to the imagination. What surprised me the most was Monroe’s camerawork, just superb. Hopefully in the near future he can helm a full-length feature, cause I’d really like to see what he can do. I’m sure it’ll happen because this little short will definitely spike his popularity.

It never fails to astound me how Cumberbatch, one of the busiest, most sought-after actors working in the industry currently, continues to churn out gem upon gem without faltering. Then it hit me, when you’re this talented and love what you do as much as he does, is it work? I mean, I know it takes a strenuous effort to do what he does, it just appears impossible that he can steadily reach such a height without stumbling. But I guess that’s why he is who he is. While Cumberbatch’s performance here doesn’t measure up to his illustrious standards, it’s still fairly entrancing. I’ve come to the conclusion that his portrayal here is hampered by the film’s length and premise. It doesn’t hit him or orbit him as it should. He gives it his all, it’s just too small a sample size to deduce any effect, so not to any extent is this his fault. For its entirety, the performance of Cumberbatch is still very poignant, and considering how compacted the story is, the output of Cumberbatch is all the more potent.

For all my unbalanced ramblings and flip-flopping, I’d still recommend “Little Favour,” if only for Cumberbatch’s performance. It is quite good, and I don’t know, I’d watch it again… 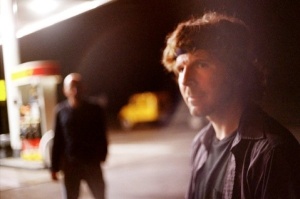 Recently, I was fortunate enough to have a conversation with filmmaker Jeremiah Kipp. You might be familiar with Kipp’s work and not even know it. Having lent his expertise to such films as “I Sell the Dead” and “Somewhere Tonight,” in addition to having directed a plethora of critically acclaimed short films. Kipp is no stranger to the big screen and is currently completing his first-full length feature behind the camera entitled “The Sadist.” Kipp is well-known for his strict attention to structural detail, staggering visuals, and his ability to work extremely well with his actors. Speaking of which, Kipp has worked with tons of high-profile talent such as Ron Perlman, Dominic Monaghan, John Turturro, and Melissa Leo to name a few. Having several of his films screened at numerous festivals, including Cannes, and receiving rave reviews for his short film “The Christmas Party,” Kipp is one of the few directors to watch out for.

You can check out Jeremiah’s website here and his IMDB page here.

Now, Jeremiah has been gracious enough to provide me with several of his short films for my viewing pleasure. So, in my way of returning his generousity, below you will find my brief thoughts on these short, yet vastly entertaining vignettes.

This Tense, unflinching, and brutal short, shot completely in black and white, is sure to catch you off guard. Right from the start, a wave of incessant uneasiness leaves a feeling of breathlessness and utter stillness. Eventually winding its way to a parallel tangent, “Contact” begins to unravel into a grim, decidedly honest story of addiction. Dotted with some violent gore and tasteful nudity, “Contact” isn’t merely appealing mentally and cinematically, but is also visually stimulating. Kipp does a sublime job using the story’s exhaustive power to full effectiveness and although at times it might not always be easy to watch. If you can stick it out, “Contact” is a very rewarding short.

Hallucinogenic, disturbing, and thought-provoking. Kipp’s brilliant sense of direction keeps this complex short from straying too far from relevance and descending into chaos. Starring Lauren Fox, best known for her role in Darren Aronofsky’s “Pi,” containing a musical score written by Harry Manfredini, who you might know as the composer of the “Friday the 13th” soundtrack, and then toss in Kipp behind the camera, it’s easy to see that “The Days God Slept” is a hidden gem. While it might not be for everyone. If you’re looking for a superbly thought-out, intricate, and controversial experience, this might be for you. Sure to stir the pot and send you into an uneasiness that’s not easy to shake, give “The Days God Slept” a watch, but be forewarned, you’re in for a shock.

At first glance, “Drool” might appear a little bizarre and monotonous. And the reason for this overwhelming feeling of simplicity and oddness is due to its intentional placement. With “Drool,” Kipp knows full well how to handle the apparent tediousness of this short’s premise and utilizes it as a lulling agent, then occasionally striking when the viewer is most vulnerable. Although it is not Kipp’s strongest short, the argument could be made that “Drool” holds more insight and underlying themes than some full-length features. Again, shot entirely in black and white. “Drool” offers a lot of the same shadiness and bleakness as Kipp’s other short, “Contact.” That being said, its distinguishability is unprecedented and is a must see for anyone looking to discover something out of the ordinary.

If you feel like checking out any of Jeremiah Kipp’s films, head over to his website (linked above) for information or links on how and where to watch. I’d like to thank Jeremiah for allowing me to watch and review a few films from his repertoire. Look him up, you won’t be disappointed.